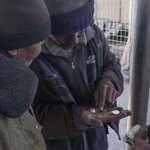 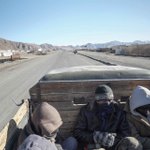 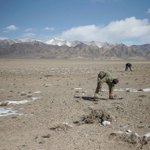 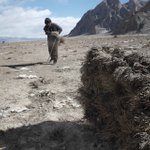 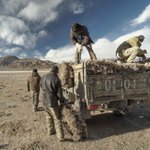 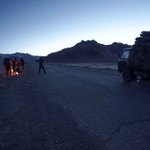 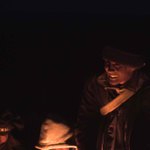 An early morning in February 2018 at a fuel station in Murghab. We are heading out to collect shrubs in the highland desert of the Eastern Pamirs. The shrubs, five different species collectively known as teresken in Kyrgyz, have become one of the region's main sources of energy after the collapse of the Soviet Union.

The truck, an old Soviet UAZ, arrives and the men proceed to buying fuel. Gasoline, smuggled across the border from Kyrgyzstan, is expensive. It is sold for about one US dollar per litre. The expense will eat away almost half of a collector's daily profits.

The men's faces are covered in balaclavas to protect them from the wind. The group looks a bit as if they would plan to raid a bank. "Your faces are all covered. What happened to you?" one of them jokes. "It's so cold that dogs could die", somebody answers. The conversation is halfway directed to my camera. We are here to make a film on Murghab, a winter film. It is our first shooting day and the men are curious about our intentions. Yrisbek, one of our main protagonists who has spent most of his adult live collecting shrubs, takes it on him to explain what we intend to do: Show contemporary life in Murghab from the perspective of teresken collectors.

We drive for about an hour toward Rangkul before branching off from the main road and heading up into a wide valley. Without delay, the collectors take their sticks and wires and venture out to start harvesting. One bundle of teresken weighs around 25kg and consists of about 250 shrubs, depending on their size. A bundle is currently sold for around 18 Tajik Somoni (USD 2). Every collector works for himself. An experienced harvester can extract four to five bundles a day, amounting to more than 1,000 shrubs.

The perennial tereksken shrubs are everywhere, yet on first sight it is difficult to see how these dry small plants can be a major source of firewood. The collectors work swiftly, and we hear the heavy breathing of our two main protagonists equipped with wireless mics. It takes two or three strokes with an iron stick to lift a shrubs' roots out of the soil; the shrubs are beaten a couple of times against the iron stick to free them from soil and then thrown onto piles for later bundling. The cracking of the roots and the rhythmic beating are the only sounds on the vast and silent plateau.

During Soviet times, the collection of teresken was by and large banned. Soviet biologists saw it as an unsustainable practice leading to desertification in this fragile arid ecosystem. One study argued that a teresken plant requires up to 40 years to regrow after harvesting. However, the science behind this study was far from solid. However, the concern for environmental damage caused by collection has resurfaced after the collapse of the Soviet Union when the first conservation NGOs moved in and believed to witness an evolving tragedy of the commons in the light of a growing energy crisis and emerging commercial harvesting practices. More recent studies, however, draw a less alarmist picture. The collectors are aware of this debate, yet it only resonates partly with their experience.

The men gather for lunch. Seeking shelter from the wind, they huddle behind the truck, sharing bread, cold tea, and a stew. The topic of sustainability comes up:

The sun inches towards the horizon and Yrisbek is concerned about the cold that comes with the night. "Let's hurry up!" The bundles are loaded onto the truck's platform. Some of them are expertly tied to the outside of the platform's planks, using the iron sticks and wires to fix them. Soon, the small UAZ looks like a hedgehog prepared to defend itself against the world out there. The idea behind this technique of loading, grounded in years of experience, is to create a cavern in the middle of the platform in order to provide at least some protection against the icy wind for those who ride on the back.

We leave just before sunset; there is not much talk, neither in the cabin nor on the platform. Everybody is tired and hoping to get back to Murghab as soon as possible. About 20 minutes before reaching town, the driver feels the car pulling to the left. A flat tire. And – we've run out of gasoline. On top of that, the jack the driver brought is useless. Luckily, we are not too far from cellphone reception. While one of the men ventures off in search for a signal, the others collect some more teresken along the road and start a campfire. It is freezing cold now, but everybody is relieved that we are not stranded somewhere up in the highlands but rather on the road close to town. Warming hands and feet by the fire, the collectors joke around. "Now, let's dance around the fire like the natives", Yrisbek quips. Halfway directed at his pals and halfway toward the camera and the imagined audience behind it,  the joke plays on the nostalgia for the Soviet Union, its ambivalent yet omnipresent civilising mission, and the end of all of this. During Soviet times, the older men in the group all had salaried jobs with special hardship benefits, the prospect of good pensions, enough coal and electricity for heat and light, and no worries about the future. Foraging for teresken is hardly anybody's first choice; yet it provides an opportunity for the time being.

Waiting for a vehicle to bring a suitable jack and a couple of litres of gasoline, and warming my stiff fingers, I ponder over the interplay of fuel prices that limit the range in which collection is feasible, the plants that belong to God, and the dreams of the men gathering around the fire – a dance of hydrocarbons, highland shrubs, and the various ambitions tied to them.