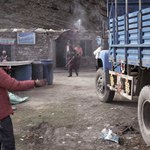 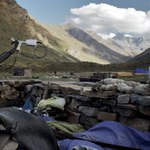 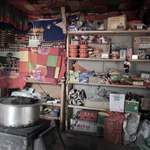 A little shop, a satellite dish, oil barrels, a few tents, a truck without number plates, and a group of stray dogs that started circling the camp on the very evening we arrived: this is Tukling at the upper tip of the Limi Valley in Nepal’s far northwest.

The nearest airfield in Nepal is several days walk away from here, but the border to China is close. A new road down from Tibet reached here last year. The little shop sells goods imported from China – batteries, beer, shoes, jackets, cigarettes, rice, flour, pans, pots, etc. It was established by a young entrepreneur from a village nearby who came back from Kathmandu for this purpose. He bought a Chinese-made Dongfeng truck and a satellite telephone link to coordinate operations. A signboard lists his five phone numbers in India, China and Nepal. His younger brother runs the shop while he continues his business ventures throughout Asia.

Last summer, two other groups of young people followed the two brothers' footsteps and set up camp here as well. Tukling, the last outpost in one of Nepal's most remote valleys, is quickly becoming a business hub for transnational trade. This, however, is nothing new. Tukling has a long history as trade mart. It lies on what was once a vibrant trade route between Central and South Asia. Large sheep and goat caravans used to carry grain, dyes, medicines, watches and other luxury items up to the Tibetan Plateau where they were exchanged for salt and fine wool. After the border demarcation between the People's Republic of China and Nepal in the early 1960s, Limi found itself on the Nepal side. The border closed and trade along this route fell into decline.

The new road built over the past two years holds the promise to finally bring back old prosperity. It was largely constructed on credit from local businessmen. With a single excavator and much enthusiasm, the Road Construction Committee – a group of people from nearby villages – built 67 kilometres of road in merely eighteen months.