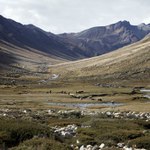 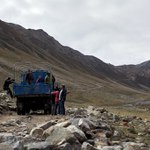 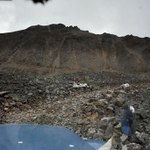 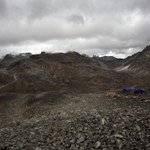 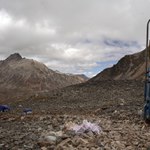 The new Limi road was extended last summer and now crosses the high Nyalo pass about 30 kilometres from Tukling, the place described in the previous post. In September 2011, a group of traders hired five Chinese trucks to transport goods from Tibet to the new road head on the other side of the pass. However, only one truck successfully crossed the pass; the drivers of the other four decided that the endeavour to dangerous. They unloaded the goods near the pass and scantily covered them with blue tarps. Bags of rice and flour, clothes and shoes, kitchenware and entire stoves were now waiting to be recovered at almost 5000 metres above sea level.

While we were at Tukling, it was arranged that one of the two trucks used to transport diesel to the road construction site would help retrieve the goods. We were offered a lift.

From the camp the road leads along a broad glacial valley before it winds up the rocky slopes to Nyalo. There, amidst a windswept scree below the pass, we found the abandoned goods. Tarps were untied, items sorted and the most perishable ones loaded onto the truck. Then, everybody started moving boulders and fill the road's worst holes with pebbles to make sure that future trucks would not get stuck again. Snow was falling.

Tourists, mountaineers, environmentalists and anthropologists tend to share a certain hostility against roads. Roads are seen to amplify the harmful rather than the beneficial aspects of development. Similarly, some of my Nepali travel companions expressed their concerns that the road might accelerate deforestation in the region. The Nyalo pass separates the treeless trans-Himalayan plateau from the lush and forested valleys further south; while crossing the pass, we saw two yak caravans transporting wooden beams for sale in Tibet.

In general, however, it is impossible to ignore the local enthusiasm for this road. It is seen as a chance to end the curse of remoteness and revive the old tradition of trans-Himalayan trade. In this sense, this is not a road to modernity. It is a road back to tradition.