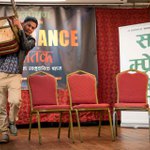 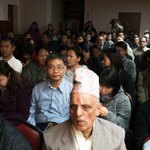 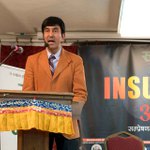 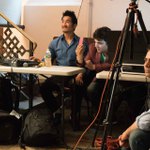 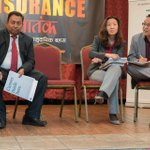 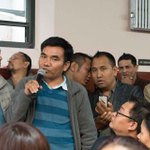 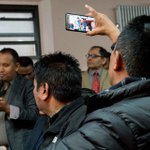 A post, again, after some hibernation. Last year, I visited the Walung community in New York to learn about their biographies and ambitions in the US. Tenzing, the former president of the Walung Community of North America promised to introduce me – not an easy job, given the pace of life in the city. “People are very, very busy here”, he warned me. They work hard, often several jobs and shifts. And the weekends are even busier with all the community events.

Sunday morning in Jackson Heights in the borough of Queens. After the weekly Tibetan class organised by the Walung Community association, I join Tenzing and his fellow Walungnga for an event at the Sherpa community house nearby. The topic is life insurance. More than a hundred people are already waiting for the session to begin. The banner on stage reads “Insurance Terror” – in a mix of English and Nepali.

A Nepali TV host leads the event. Four insurance agents present their takes on the topic and answer questions. Among them is a Chinese woman in her late 30s who works as an independent agent, and while she doesn’t speak Nepali she is clearly familiar with the needs and fears of immigrant communities. “You have come to America to make money and have a better life. You work hard, and you don’t mind to work hard. But how to protect your hard earned money, how to protect your family?” she asks rhetorically. “We have all come here for education, for work, and regardless of whether we speak good English or not – we are not stupid! Don’t let yourselves be fooled!” The event quickly becomes emotional. Many are here to vent about their experiences with life insurance. One young man has signed four contracts for his family. He pays a monthly premium of USD 1,450.

After more than three hours, when the Nepali TV host tries to close the session, there is is unrest and disappointment. Wei Wei sides with the audience, saying that she will stay until all questions are answered. “And if you get hungry, I will buy you food”.

Back home in the flat I rent in Queens, pondering over insurance and trying to make sense of the worlds Tenzing and his fellow Walungnga are juggling, I switch on the TV. It is March 2016. Donald Trump on all channels. His campaign is gaining steam. My AirBnB host, a Latina immigrant herself, has put a copy of Make America Great Again on my desk. What an irony. While the xenophobic rhetoric of the president-to-come blames immigrants for America’s decline, I have never seen the American Dream more alive than among the people I just met.