Arrivals, Then and Now 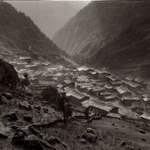 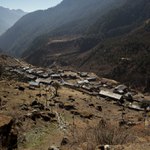 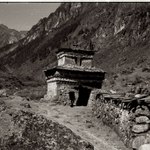 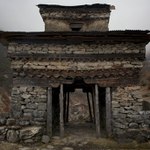 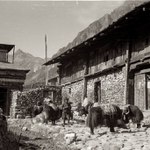 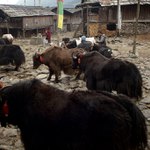 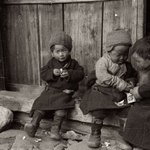 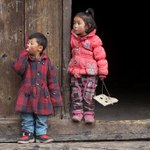 Christoph von Fürer-Haimendorf took these black-and-white photographs during his visit to Walung at the end of November 1957. Walung is smaller now than it used to be. In 1962, a flash flood eroded the high river bank on which the village is located, and over the following years almost half of the houses were taken away by landslides.

Otherwise, however, comparing Haimendorf’s images to my own taken in November 2012 reveals striking similarities. It is almost as if the political, economic, and social transformations of the past fifty-five years had not left any traces. The large two-storey houses, the wooden roofs, the gate that marks the northern entry to the village, and the spacious cobblestone forecourts where the yak caravans coming down from Tibet are unloaded – all of this has hardly changed at all.

Only when I was back in Kathmandu did I notice how closely my own images mirror these historical photographs. Pondering over the absence of visible change so uncommon in fast-moving Asia, I think that these images depict the scene and setting of a repeating event that has remained at the core of everyday life in this trading village: a caravan comes back from Tibet, goods are offloaded and stored in the ground floor of the house, children are told to step back and mind the yaks. Full of anticipation they stand in the doorways, eagerly waiting for the presents their fathers bring. Stories and things of the world out there arrive at their doorsteps – a foretaste of the adult lives of constant movement so characteristic for these remote yet cosmopolitan pathways across the Himalayas.