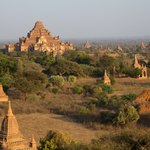 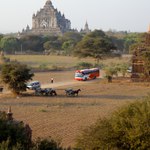 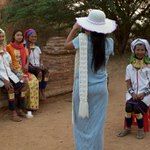 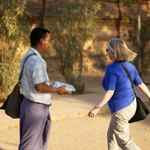 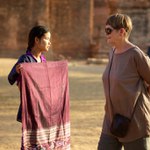 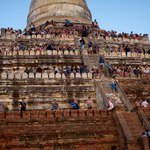 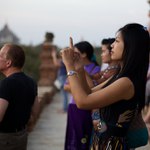 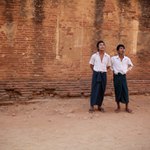 Late afternoon at Shwesandaw Paya, one of more than 2000 temples in the plains of Bagan, Myanmar. Once, there was a city here, the cosmopolitan capital of an empire. It collapsed in the late 13th century. What remains are fields and goat pastures dotted with pagodas – reminders of erstwhile splendour. It is an incredible sight.

Today, groups of street vendors inhabit many of the pagodas. They sell sand paintings, textiles, jewellery, lacquerware and cold drinks to tourists and pilgrims. The vendors are young, mostly in their teens and early twenties. They know each other well. They pay a yearly licence fee that binds them to a specific place. Little communities form, and belonging to one of them is an integral part of growing up in Bagan. It is a lighthearted atmosphere. People tease each other, joke and laugh. There is not much work; the midday heat has not yet waned and only a handful of tourists are here.

Around 4:30 p.m. Shwesandaw gets busy. More vendors arrive and set up their stalls. Three "long-neck" Palaung women arrange red plastic chairs to pose for photographs. Five or six children are selling postcards. They come here every day after school.

Then, shortly after 5 p.m., dozens of buses, taxis and horse-carts appear on the dusty road that leads to the stupa. Several hundred tourists come here every evening to witness the sunset. Tired of a day of sightseeing, they try to escape the vendors. They rush to climb the pagoda in order to secure a place to get a real glimpse of the scene so often depicted on Bagan postcards, absorbing the moment by reproducing the iconic image themselves. Focused on the horizon, cameras their paraphernalia, they are rapt participants in a nameless daily ritual.

The vendors at the bottom of the pagoda take a break. They chat and wait for the night to fall and the tourists to descend, knowing that they will have one more chance to sell a thing of two before calling it a day and heading home.