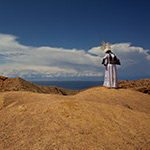 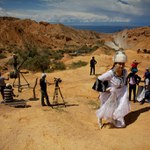 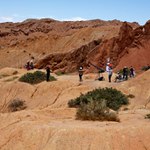 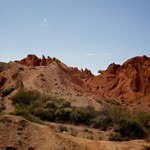 “Look, a real princess!” my daughter whispers in my ear. There she stands on a red and yellow cliff overlooking Issyk Kul, the deep blue lake between the two ranges of the Tien Shan in Kyrgyzstan. National Television is shooting a music video with a well-known singer. They set up a camera crane and are doing rehearsals while waiting for the harsh light of the early afternoon to soften.

The sandstone formations that provide the setting for the scene are called skaska – fairytale. Just off the main road that leads along the southern shores of Issyk Kul, they are easy to reach and attract many visitors. We mingle with a group of Kazakh tourists and watch the scene unfold.

The slow pace on the film set, the extensive preparations, the boredom and waiting under the scorching sun interrupted only by the short moments of focus and ritual when the camera runs, and us bystanders, acknowledged but ignored, bestowing our interest and curiosity upon the spectacle –  all this suits the surreal landscape exceptionally well. A princess in a fairytale, indeed – as real as it gets.

Good location scouting, one could say. Or is it more the other way round? That the place lures in the people to worship it and praise its name around the globe?

Which, in any case, is probably just what I am doing here.