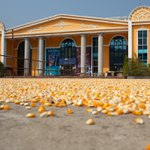 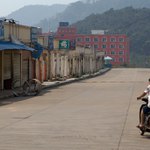 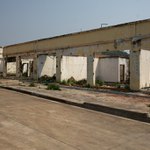 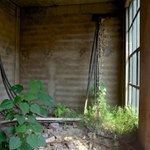 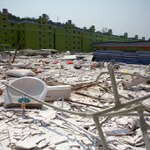 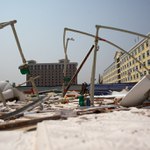 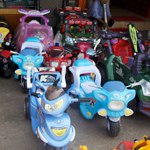 March 2013, Golden Boten City at the border of Laos and China. Maize is being dried in front of the erstwhile nightclub. The golden hue of the edifice matches the color of the corn. The nightclub's main door is bolted with a cheap bicycle lock. The staff quarters are deserted, save for a lonely Chinese squatter reluctant to talk.

Below the nightclub lie a dozen of new but equally deserted hotels, gambling halls, and residential units. Many of the structures, however, were never quite finished. Trees start growing in the basement of the tallest building.

The complex was primarily designed as a casino city for Chinese visitors, an easily accessible exclave where gambling was legal. It was advertised, however, as much more. Golden Boten was envisioned to become a real city one day: an "enclave of improvement", as Pál Nyíri calls it – a model of modernity that would spearhead development in northern Laos.

Golden Boten City was built by a Chinese businessman on leased land. It was granted the status of a "Special Economic Zone" and had the right to issue identity cards and number plates. It even operated its own quasi-police force. As a visa was not required for Chinese citizens, gamblers came in droves. But in 2011, Boten closed down. The story of Chinese visitors being taken hostage for not paying their gambling debts led the Chinese authorities to issue an official warning against going to Boten. The visa-free regime came to an end, the phone lines were cut, the prostitutes left, and the noodle shops shut down.

The rise and fall of Boten attracted quite a bit of media coverage over the past few years, and I was following the story with great interest. It certainly resonates with the boom and bust that is so characteristic for many places along the Chinese border today. But does Boten stand for something bigger? The failure of Chinese development abroad? I don't think so. Against the backdrop of all the brand new roads and the omnipresent rubber, teak, and sugarcane plantations in northern Laos, Boten seems more like a footnote. Eerie ruins of a foul investment, yes. But not the symbol of a busted dream.

Since 2012, talk of re-development is in the air – a new Boten without all the vice. Lets see. For now, one of the few remaining shops on the main road up to the border sells battery-powered toy vehicles for children: light blue scooters, red sport scars, dark green Humvees – affordable dreams for the future generation.