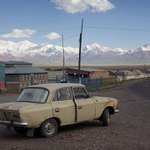 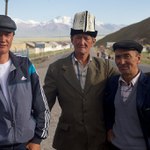 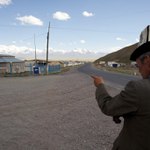 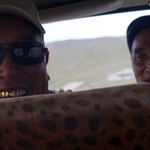 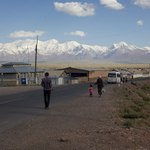 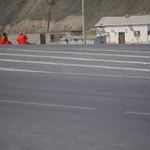 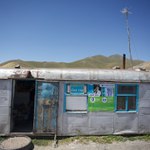 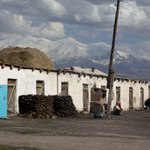 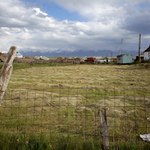 Sary Tash in southern Kyrgyzstan is a place of transit. Here, the Pamir Highway to Tajikistan meets the roads to Osh and via Irkeshtam to Kashgar. Set spectacularly against the backdrop of the mighty peaks of the Pamir Alai range, the settlement consists of a hundred houses, a hospital, a school, a few shops and a petrol station.

The petrol station, located right at the crossroads, is the centre of activity. People are dropped off here and wait for onward transport. Tired tourists on bicycles arrive from Tajikistan and look for a place to change money. Guesthouse owners advertise their rooms. The petrol station manager smokes a cigarette with three of his friends. Everybody is happy to chat. Who are the two Chinese road workers in orange overalls, for example? They have been sitting and waiting here all-day long. And what about the mobile home with Swiss number plates passing by? They have a shower, a toilet, and a TV inside! Little, temporary amusements.

The wind picks up. The four men at the petrol station seek shelter in the rusty Moskvich that belongs to one of them. I am invited to squeeze in. There is not much to do in Sary Tash, they explain. There are no jobs, no perspectives. The young have left for Russia, only the old stay back. China is near, but people have not been able to benefit from the booming trade. "The China business is wholesale only", I am told. Those running the show sit in Kashgar and Osh and the goods pass through in sealed 40-foot containers. The "new Silk Road", often invoked when talking about the road through Sary Tash and its role as one of China's gateways to Europe, has barely left a trace.

Part 2: Shelter Below a Rock