Waiting for the Chinese 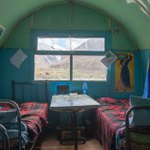 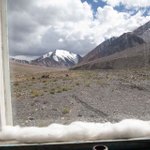 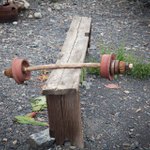 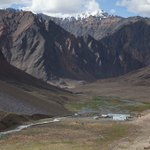 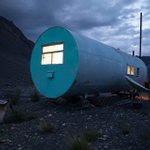 This is the silver mining camp at Bazar Dara in the Tajik Pamirs: a barrel shaped cabin on leaf springs equipped with a kitchen, four beds and central heating; barracks for the miners; a hangar for the equipment; a coal-fired sauna; and an improvised outdoor gym with an iron bar for pull-ups, a wooden bench and some weights made from an old truck wheel. Over the winter, from November to April or May, the camp is completely cut off from the outside world. Work in the mines is suspended. One employee, together with his wife and family, guards the camp. There is a portable DVD player and four boxes of DVDs, and also satellite TV, but the receiver needs repairing.

Bazar Dara was not always as isolated and remote as it feels now. In the 11th century, a few kilometres further down the valley, there was a bustling mining and trading town with more than eighty houses, a caravansary, and silver processing facilities. At some point, for reasons unknown, the town and mines were abandoned.

Centuries later, in the 1970s, a Soviet geological expedition spent one summer in Bazar Dara digging a drift and prospecting for silver veins. In 2007, a Kazakh-Dutch consortium came in and continued mapping deposits. This year the Kazakhs left the joint venture and the Dutch sold the enterprise to a Chinese company.

Much uncertainty is in the air. Will the Chinese really come and stay? And will they provide employment in the way their Kazakh-Dutch predecessors did? How to communicate with them, given that their translator speaks no Tajik and barely any Russian? And last but not least, what to cook for them, and what would they get to eat themselves? The only provisions the Chinese delegation visiting the camp left behind were a box of instant noodles and tinned fish in fermented soy bean paste, which nobody developed a liking for.

Hopefully, the Chinese will at least help fix the satellite dish before the winter comes, they say.