Three Idiots and a Lake 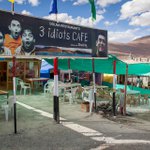 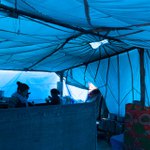 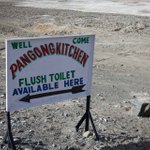 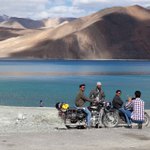 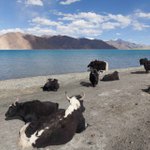 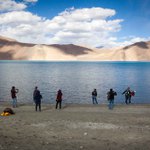 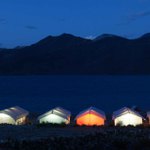 This is Pangong Tso, a deep blue lake in Ladakh right at the line of control between India and China. Over the past few years, the lake has become a major destination for young Indian tourists in search of adventure. In the three lakefront settlements of Lokung, Spangmik, and Manmerak dozens of tent restaurants and tourist camps straddle the shore, advertising their extensive menus and “flush toilets”. The tents are made of cheap blue tarps and old, white cotton parachutes decommissioned by the Indian Army.

The boom was triggered by the film 3 Idiots (2009), starring Amir Khan. The film’s climax scene was shot at the lake. Many of the restaurants directly refer to the film, featuring names such as “3 Idiots Café” or “Rancho” – the name of Amir Khan’s character in the film. Since then, several hundred Indian tourists visit Pangong Tso every day during summer, some in cars and many on rented Enfield bikes.

On the one hand, the sudden boom has been a boon for the local population. Some families run restaurants and guesthouses while others lease their land to outside tourist camp operators for up to 100,000 Indian Rupees (USD 1,500) per year, depending on the number of tents. On the other hand, environmental NGOs are concerned about this rapid development. A conservation biologist we meet over dinner back in Leh tells us that in the span of less than eight years permanent damage has been caused. Even the bird population is changing. Seagulls scavenging for biscuits and other food left behind by the tourists are driving other species out. The Indian Goose, who breeds at the lake, faces a loss of habitat, he argues. Moreover, the fragile high-alpine ecology cannot cope with the waste left behind. In Spangmik alone there are now 218 “flush toilets”; all the waste water seeps into the lake through the loose alluvial soil. In winter, when the tent cities are gone, the naked toilets remain. A testimony to the senseless destruction going on, he says. What we deal with are not three but millions of idiots, he adds.