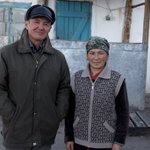 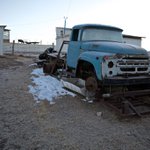 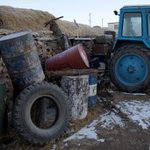 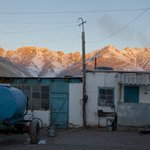 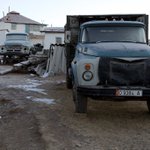 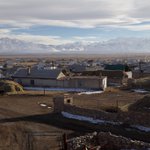 In August 2013, we spent a couple of days in Sary Tash where we met Chyrmash, a retired truck driver who spent much of his live on the Pamir Highway. Chyrmash was building a 2-storey guesthouse with a splendid view of the Alai Range. It was scheduled to open in the following season. In November 2014 we came back to the Kyrgyz Pamir and stayed for a night at Chyrmash's place.

The courtyard around the house was a veritable museum of Soviet tractors, trucks, trailers and tools. Sary Tash's role and position in the world had changed radically over the past 25 years. During Soviet times, Sary Tash was a wool-and-meat-producing backyard, strategically important because of its proximity to the Sino-Soviet border. But the state-run farms are long gone and today smallholding and remittances from sons and daughters working in Russia have replaced the former Soviet salaries. The disused machinery in the courtyard, I thought, was a material testimony to this transition.

At first, I was reluctant to take pictures. The picturesque cemetery of things just fitted too neatly with the stereotypical imaginaries of post-Soviet decay. But the more I talked to Chyrmash, the more I began to understand why he kept all these things around. He simply adored the quality of good old Soviet engineering. He proudly told me that his 30-year old Niva would still beat his friend’s fancy SUV when they went fishing together. And the two blue old Sil trucks? – There has never been a more reliable vehicle for the Pamirian winters, Chyrmash answered. When other trucks suffered from the arctic temperatures, this one would just run.

The things in the courtyard, I realised, were not nostalgic relics of a forlorn past – they were spare parts for the future. With them, Chyrmash's machines might run for another generation.