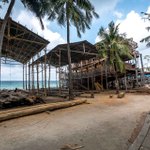 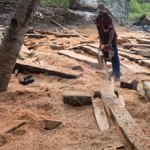 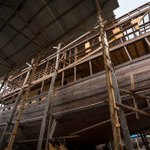 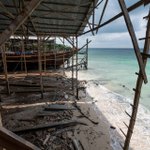 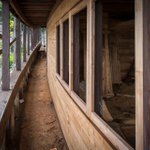 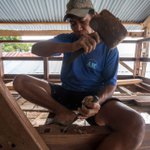 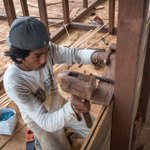 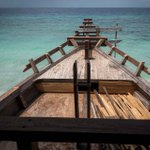 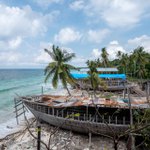 Near Bira, in Bulukumba district on the island of Sulawesi (Indonesia), there are a few shipyards right along the beach. With the simplest of tools – chain saws, hammers, drills and planes – a dozen men craft large wooden vessels from the finest ironwood. The sand is covered with wood chips and sawdust. Children are playing between the unfinished hulls.

These ships are called phinisi and they are made by Bugis shipbuilders. Bugis seafarers have used them for centuries on their trading ventures in the region. Navigating not only the seas between China, Singapore and northern Australia but also between colonial powers, the vagaries of trading privileges and restrictions, as well as shifting market demand for anything between sea cucumbers and opium, Bugis traders have made a name for themselves.

Originally built as schooners, most phinisi are motorized today. The large one in the images – about 30 metres long and three storeys high – is allegedly an order from Germany and will be sold for a mere 300,000 Euros. It will serve as a luxurious liveaboard for scuba diving trips around Sulawesi.

The more I see and read, the more questions I have. I'd love to know about the woods used and their sources, the process of construction and the rituals in which it is embedded, the lives of the families here, the contacts to German dive shops and the continuing links to China with its demand for sea cucumbers.

Another PhD in another life, perhaps.