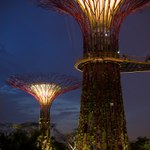 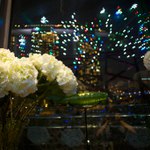 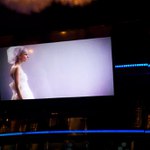 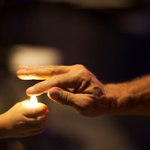 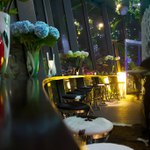 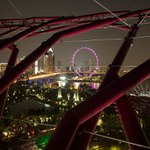 A few months ago, Singapore’s Gardens by the Bay opened to the public, a large park on reclaimed land at the island’s southern tip. Advertised with much fanfare as an important step towards the transformation of Singapore from a “Garden City” to a “City in a Garden”, the park features cooled conservatories and a grove of “Supertrees” – 25 and 50 metre high steel structures that will eventually be overgrown and form an artificial canopy of flowers and climbers. The canopy is envisioned to regulate temperature and provide shade; photovoltaic systems mimic photosynthesis and rainwater is harvested for irrigation.

We buy an 18-dollar coupon for an aperitif on the treetop bar of one of the Supertrees. An elevator lifts us to the canopy. Artificial flowers abound and the golden face of a Buddha looks down on us, embowed in artificial vines. Even the flickering tea-lights on the table are LED-powered, much to the delight of my little daughter who touches them carefully, stunned by the magic trick. A large flatscreen shows an eternal parade of young models walking down a runway. The glamour of Fashion TV blends naturally with the surreal treetop shelter and the view of the city’s illuminated financial district.

Singapore, just north of the equator, has developed a special relationship to nature. Constant gardening is required to prevent the tropical forest from recapturing the city. At the same time, the city state has invested much in recreational facilities to make the tamed nature accessible – a bird park, a large zoo, and several treetop walkways allow for its consumption. The Gardens by the Bay, however, take the relation of humans and nature to a new level. They manifest a vision of a more potent, more stunning, and less messy incarnation of Singapore’s tropical surroundings. An avatar of nature itself. Welcome to Pandora City.

Avatara is originally a Sanskrit term that stands for the voluntary descent of a deity to the world with all its illusions – its maya. But for us contemporary denizens of planet earth, the term avatar rather stands for the little images representing our identities in cyberspace, or maybe James Cameron’s Hollywood version of an avatar descending to Planet Pandora in order to save the native Na’vi. Gazing across from the Supertree’s platform to Singapore's skyline, however, feels so absurdly real. The canopy bar provides a vantage point onto the 21st century’s hyperreal maya – the lungs of global capitalism.