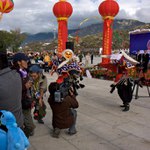 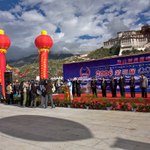 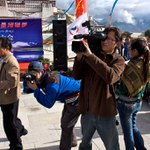 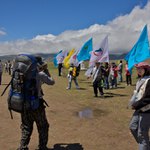 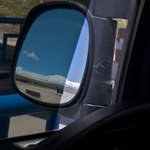 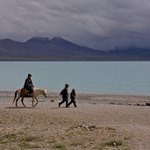 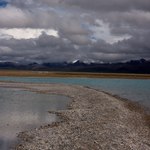 Towards the end of my time as a student of Tibet University in Lhasa, the Tibet Tourism Bureau (TTB) invited us for an excursion to Namtso, a scenic lake about half a day’s drive from the city. It was the end of August 2008, barely a week after the closing ceremony of the Olympic Games in Beijing. Security was exceptionally tight in Lhasa, and only a handful of foreign students were still around. I was curious about the motivation behind the Tourism Bureau's offer.

A few days later, we were picked up early in the morning by a cheerful Chinese tour guide from Beijing. However, instead of proceeding to the lake as we had expected, we were taken to the square in front of the Potala palace. Only then did we realise that we were part of a larger event – the 3rd International Tibet Namtso Lake Walking Convention. Rehearsals for the opening ceremony were about to begin. Cardboard signs displaying various country names were handed out. Our role was to add the international element to the event, as most of the participants were Chinese tourists. I started with the “Japan” sign for the rehearsal, but was later entrusted with “Norway”.

The ceremony followed a pattern everybody in Lhasa is familiar with: a red-carpeted stage had been erected in front of the Potala. Representatives and officials held speeches and posed for a group photograph against the backdrop of Tibet's architectural icon. Masked Tibetan dancers rounded off the event. Media coverage was extensive and the number of photographers and television crews outnumbered the dancers three to one.

Three hours later, the ceremony finally came to an end. The convention's participants – including us – were directed towards half a dozen tour buses. Headed and tailed by police vehicles, the convoy started moving northwards towards the lake – at least that was what we expected.

However, Namtso was not the destination scheduled for that day. The buses stopped in Damshung, where a tent city had been erected and a young Tibetan woman welcomed everybody with a white katak, a Tibetan ceremonial scarf. Lunch was being served. Later in the afternoon, a horse festival was to take place nearby; only the next day, we learned, was the convention to reach Namtso and start hiking.

Our role, however, was accomplished. The Chinese tour guide who had picked us up in the morning organised a minibus to take us up to the lake (as promised) and then back to Lhasa in good time before anybody at the university might start to worry.