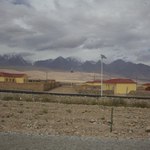 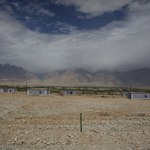 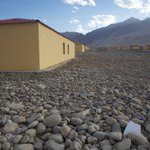 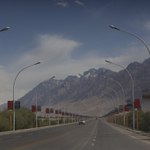 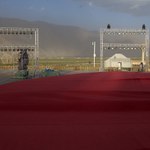 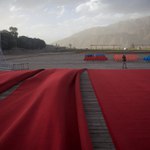 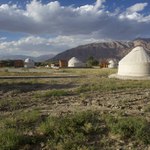 Travelling up the Karakorum Highway from Kashgar to the Pakistani border, it seems that a new house is being built for each and every family in the region. The new houses come in two varieties – yellow ones with red tin roofs and blue ones with traditional flat roofs. The new houses are a result of China’s policy of constructing a New Socialist Countryside, which was announced in the 11th five year plan (2006-2011). I saw the beginnings of its sweeping effects in rural Tibet in 2008/2009. Now it has reached the western peripheries of Xinjiang, and it did so with a pervasiveness that baffles me. Most of the new villages have just been completed, and most of them are not yet inhabited. Nicely painted but cheaply built, the new and empty settlements have a eerie atmosphere.

Some suspect that the whole endeavour is primarily a means for the local government to meet their GDP targets. While this may be true, I think there is more to it. Many observers, including me, tend to take modern China all to easily for a socialist country only by name. The socialist new villages make me think whether the Party State’s white papers and rhetoric should be taken more literally. The socialist new villages are a playground for China’s New Left and their visions of mending the negative aspects of a market economy. The new villages, however, do not come without a neoliberal twist. The houses are subsidised, but those moving in still have to take out a mortgage, which they are supposed to pay back eventually. The policy has the potential to turn the entire rural population into a society of mortgage holders. “Are people given a choice whether they want move into the new villages?”, I ask. “Yes, they have a choice. But often, there is not much they can do”, I learn.

In many places, the new villages are built in proximity to the road – away from pastures and fields in the sheltered fertile river valleys. Around Tashkurgan, an old Silk Road town in the Pamirs, the contrast is particularly striking. On one side of the brand new road, there are the green and fertile grasslands along the river, sprinkled with yurts and cattle. On the other side, there is the new and empty village in the windy, dusty desert, waiting to be inhabited. Only a planner in an office far away would chose such a location.

But its not all socialist modernity; as so often in China, the idea of heritage and its conservation is intimately entangled with modernist development. In Tashkurgan, at the edge of the fertile plains near the river, an enormous open-air stage has been built, fully featured with stage lights and red carpets and ready to be used for folkloristic tourist performances against the stunning backdrop of “real nomads”. And, while the pastoralist are supposed to move into the new villages, the anticipated tourists can rent a “traditional” yurt (although with an attached bathroom) in one of the resort complexes nearby.

I wonder, how all of this will play out over the coming years.