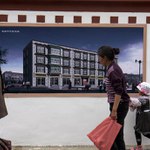 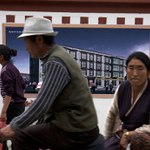 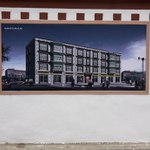 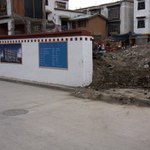 People passing by a signboard at a construction site in Lhasa's old town. The signboard shows an artist's rendering of the prospective building. This is how Lhasa's centre is meant to look like according to government plans: more or less Tibetan in style but updated to meet the commercial needs of the city's centre.

Some will take this as evidence of the continuing demolition of old Lhasa and its replacement with a Disney-like theme park for tourists and consumers. In China, however, this is not the common perception. Whereas in Europe safe-guarding architectural heritage means preserving the old, here it means building new houses that look like “heritage”. Throughout China, countless ethnic villages and cultural theme parks have followed this model since the 1980s. Authenticity has many meanings.

The artist's rendering does not give away whether the building will really be a traditional stone house or just a concrete structure with an imitated stone facade. But the image shows other details: customers casually strolling by, a couple of businessmen in suit and tie, and a single monk window-shopping at a certain distance. This is the peaceful and prosperous Lhasa that fuels the Party State's visions for Tibet.

These visions, however, seem more distant now than a few years ago. On the one hand, authorities expect a new record of seven million (predominantly domestic) tourists coming to Tibet this year. On the other hand, self-immolations, protests, and pilgrims hassled on their way back home from India continue to make headlines.