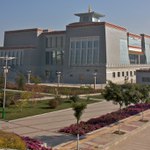 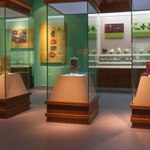 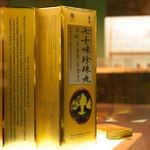 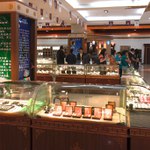 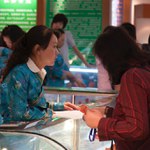 I am collecting visual materials for an upcoming exhibition on Tibetan medicine at the Rubin Museum of Art in New York. This brings me back to my own efforts at “Seeing Tibet”.

Xining, Biotech Zone, 2009. Amidst functional factory buildings there is one that stands out: the Tibetan Medicine Museum of China, a grandiose structure that blends monastic style elements with contemporary Chinese tastes. Surrounded by a vast parking lot, well-kept flower beds and patches of irrigated lawn, the museum has a temple-like air. The sheer size of the building and its enormous glass façades around the entrances give it an imposing appearance, something of an upscaled Tibetan monastery on steroids.

The museum’s upper floor houses the world’s largest thanka – six hundred metres long and worth an entry in the Guinness Book of Records. The basement features a lavish sales area where young Tibetan women in meticulous dresses, harmonised with the colours of the shop’s interior design, sell Arura’s products in an atmosphere similar to that of luxurious airport boutiques.

The museum, established in 2006, is the brainchild of the Qinghai Arura Tibetan Medicine Group. The Group not only runs the biggest pharmaceutical factory in Qinghai, but also the Tibetan provincial hospital, a research centre, and the Tibetan medicine college at the local university. The Tibetan-run company’s engagements take many forms. And thus, rather than just an expression of crude commercialisation, the museum is also something else – namely an ambitious Tibetan effort at claiming a space for Tibetan medicine in contemporary China.