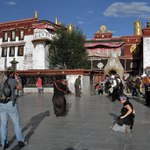 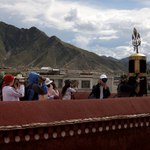 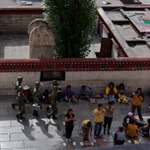 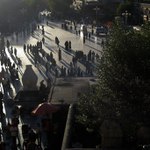 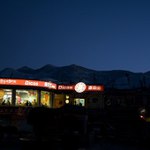 On the bazaar street known as Barkhor a stream of people circumambulates Lhasa's central Jokhang temple in a clockwise direction – elderly Lhasans churning their prayer wheels, young people on their way home from work, guides with their tour groups, and pilgrims from distant places on the Tibetan Plateau. During the year I lived in Lhasa I often made a little detour on my way home from town to join them for a circuit or three. I enjoyed watching the crowd's composition change with the seasons of the year and street vendors adjusting their merchandise accordingly: handicrafts for tourists in summer, warm clothes for pilgrims in winter.

In the early evening, when the shadows get longer and the daylight turns golden, photographers from around the globe gather here. Their preferred tools are expensive tele lenses that enable them to capture the smile of a nun or the weathered face of a pilgrim passing by. There is hardly any interaction between photographer and subject. The long lens keeps the distance.

The results of these distant encounters, sharp and picturesque, are used for postcards and calendars, coffee table books and websites. The images that sparked so many a photographer's dream to visit Lhasa are reproduced over and over again.

Today, there is no shortage of images from the Land of Snows, once considered so remote and inaccessible. Yet, despite the sheer abundance, the scope of images has remained astonishingly narrow: monks and monasteries, grasslands, nomads, prayer flags, and pilgrims are the dominant themes. Tibet is imagined and pictured as a devout and fragile world permanently in danger of disappearing. As a result, much of what makes contemporary Tibet goes unnoticed. Fellow photographers, tour groups, or the local outlet of the Dicos fast food restaurant on Barkhor Square usually remain outside the frame.