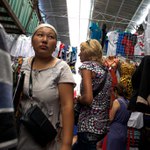 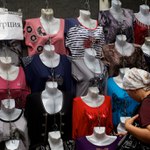 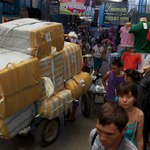 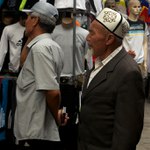 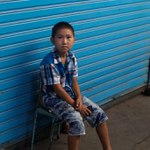 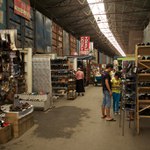 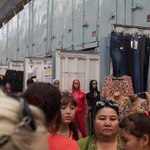 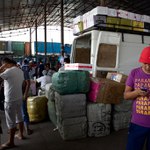 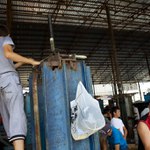 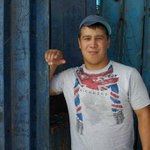 These are images from Dordoi Bazaar in the outskirts of Bishkek, Kyrgyzstan. Built with tens of thousands of double-stacked shipping containers – the lower ones serving as shops and upper ones as storage rooms – Dordoi is one of Asia's largest markets. It is organised in sections according to the origin or type of goods, with the pricier merchandise coming from Turkey, South Korea or Europe. However, the vast majority of goods is "made in China" and shipped by truck across the Tian Shan range to Kyrgyzstan, following one of the ancient trade routes known collectively as the Silk Road. While, like the erstwhile Silk Road entrepôts, the bazaar continues to serve as a major hub for the reexport of Chinese merchandise, silk has given way to electronics, shoes and clothes adorned with the labels of familiar global brands.

We visit the packing station, where piles of clothes are pressed into bales for onward transport. People are initially sceptical about me taking pictures, but relax after a while. Our friend who shows us around explains that most of the bazaar economy is informal. He worked here himself and sees things with an insider's eye. Police tour the area and collect "fines", but the bazaar is too big, too important to be fully "formalised". There is too much at stake. Many of the rich and powerful have links to Dordoi, and the market offers employment for tens of thousands of people – from cart pullers to shop assistants and entrepreneurs.

Dordoi is home to many aspirations; it fulfils the promise to make 21st century consumer culture available to the masses. The empty shipping containers reused as sales outlets are like sediments of the global economy. Brimful with goods produced in China and channelled through the old arteries of the Central Asian trade network, the containers are finally stranded here. Sold for a mere thousand dollars, they are a material testimony to the trade-imbalance between China and Kyrgyzstan – and, maybe, an ironic postscript to former Cold War rhetoric and its promise that only liberal democracy would open the gate to the manna of capitalism.